As of this Effective Date, all newly published HPDs will need to be compliant with HPD v2.1.1. New HPDs created using the HPD Builder, and any other Standard-compliant automated tool, will automatically be created under HPD v2.1.1. Within the HPD Builder tool manufacturers will, at their option, be able to update an existing HPD v2.1 to the v2.1.1 revision. HPDs completed under previous versions of the HPD Open Standard will remain valid through their existing expiry dates.

New to HPD v2.1.1, manufacturers will now have pathways that clarify how they should report on products with “Special Conditions”—situations where the already-defined HPD methods cannot be applied, due to material characteristics.  Also included are updates to strengthen the consistency of Hazard Screening Methods.

Consistent with HPD v2.1 in Other Areas.  HPD v2.1.1 continues to offer all previous improvements made in the v2.1 release of the HPD Open Standard in 2017. Key features include full harmonization with LEED v4 credit requirements, and integration of a LEED “pre-check” indicator. The latter enables project teams to rapidly identify, for further review, products that have the basic requirements to be compliant with the LEED v4 Material Ingredient and Disclosure credit. 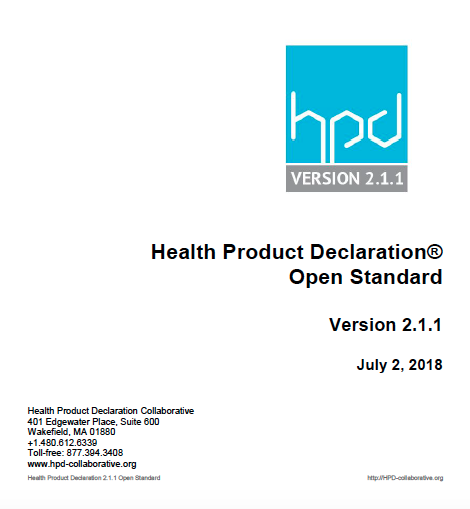 The Health Product Declaration Open Standard is the intellectual property of the HPD Collaborative, and provided to the public, free-of-charge, under the Creative Commons: Attribution-NoDerivs CC BY-ND 4.0) license.  Anyone using the HPD Open Standard must comply with the terms of this license agreement, which will be enforced by the HPD Collaborative. For information on use of the terms, logos and trademarks, please click here.