For HPDC this time of the year marks key milestones in our progress. HPDC was founded in October 2012, and since introducing its open membership in October 2015, HPDC has rapidly grown to a membership of over 270 organizations with 600 individual participants. Thank you to all of our members for your amazing support and all of your efforts to advance transparency and material health practice – your membership makes our programs possible – thank you!
HPDC’s mission is to enable the development of a thriving Material Health Ecosystem: the organizations that create the methods, tools and information needed to make change happen – and the entire spectrum of participants – suppliers, manufacturers, architects and designers, engineers and contractors, building owners and managers. Our goal is to evolve the HPDC organization as a mechanism for this entire ecosystem to work together – through open, collaborative innovation – to accelerate our movement to a healthier built environment for everyone.
Significant change is happening. It is now possible to easily find chemical and health information for thousands of products – this was not the case just a few years ago. One measure of note – over 100 new HPDs typically are published each month, from forty or more manufacturers – and there are now over 5,200 published HPDs in the HPD Public Repository, covering 15,000+ products – a resource available freely to all.
At two marquee events this autumn – ILFI’s Living Product Expo and USGBC’s Greenbuild – HPDC and many of our members and ecosystem partners will present and have on display the results of this remarkable progress. We hope that many of you will be able to attend and see the latest advances for yourself. HPDC also will hold our Annual Member Meeting during Greenbuild week, in Atlanta on November 19, from 5:30-7:00, which will be hosted this year by HKS in their Atlanta offices. We will announce the 2020 HPDC Board and provide a preview of HPDC’s plans for the coming year. We look forward to seeing you in Nashville and Atlanta!

Come visit HPDC at Living Product Expo 2019 in Nashville, Tennessee on the trade show floor at Booth 200. HPDC staff and members will be on hand to answer any questions you have about HPDs and HPD Open Standard. See demos of the newest tools in our toolbox: Supplier HPD pilot and Declare-HPD automated data exchange capability.
Living Product Expo connects 700+ industry leaders who are all part of a movement to bring beautiful, healthy materials into the places we live, work, and play. The Expo will be held at the Music City Center, Nashville’s convention center located in the heart of downtown. The 2.1 million square foot facility opened in 2013 so that Nashville could host large, city-wide conventions in the downtown area.
Living Product Expo is hosted by the International Living Future Institute. Companies and organizations at the Expo are writing a new chapter in industrial design and challenging the status quo when it comes to how products are designed, sourced and manufactured.
LEARN MORE 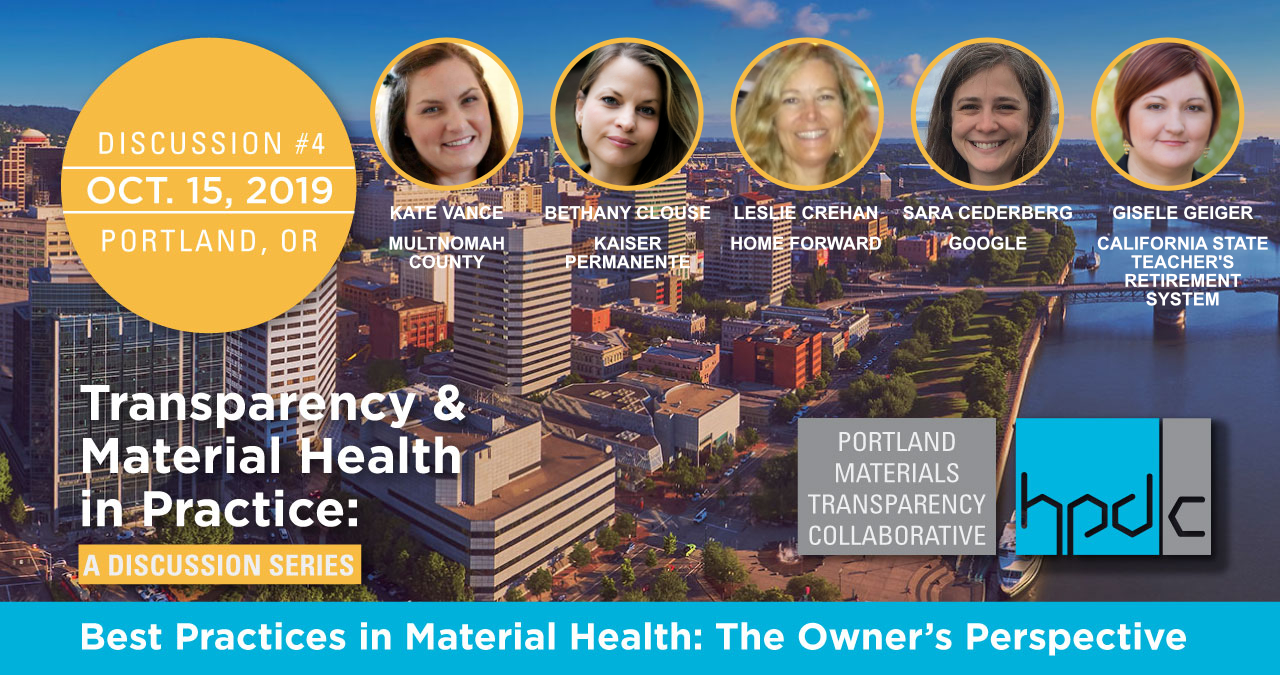 Are you interested in learning about the “owner perspective” on healthier buildings?Portland Materials Transparency Collaborative (PMTC) and Health Product Declaration Collaborative (HPDC) invite you to the “Best Practices in Material Health: The Owner’s Perspective.” This fourth discussion in our continuing discussion series “Transparency and Material Health In Practice” will be part of Portland Sustainable Building Week at AIA Oregon.
This panel will feature owners representing a wide range of public and private organizations who have a vested interest in material transparency including Google, Multnomah County, Home Forward, California State Teacher’s retirement System and Kaiser Permanente. Topics will include aligning sustainable materials goals, including human health and embodied carbon, with organizational values, return on investment, and breaking down barriers to allow growth in owner engagement.
LEARN MORE & REGISTER

Design 4 People brings design leaders together to help them understand how to improve human output within the built environment. Inspiring speakers, interactive sessions, and networking time gives attendees new ideas on how to incorporate innovative methods into projects, facilities, and design.
Tristan Roberts, Director, Technical and Education Programs, Health Product Declaration® (HPD) Collaborative and Jim Newman, LEED AP, O+M; EcoDistrict AP will be part of USGBC MA’s inaugural Design 4 People Conference. Don’t miss their presentation on Wednesday, October 23 from 11:00 – 11:45 AM called “Product Transparency and Health: From Where You Are to Where you Want to Be.”
LEARN MORE

HPDC has formed a research collaboration with Dr. Rolf Halden and Arizona State University’s (ASU) Center for Environmental Health Engineering to establish a research program on the emerging field and practice of transparency and material health.  The program will provide research-based insights into the use of and emerging opportunities for safer chemistry and healthy material selection. The first project is a study of resilient flooring, which is being conducted jointly with the Healthy Building Network. Initial findings will be forthcoming in early 2020. Dr. Halden is the director of the Biodesign Center for Environmental Health Engineering.  Indro Mondal, a PhD candidate at ASU, has joined the HPDC team as a research assistant, as part of this program. 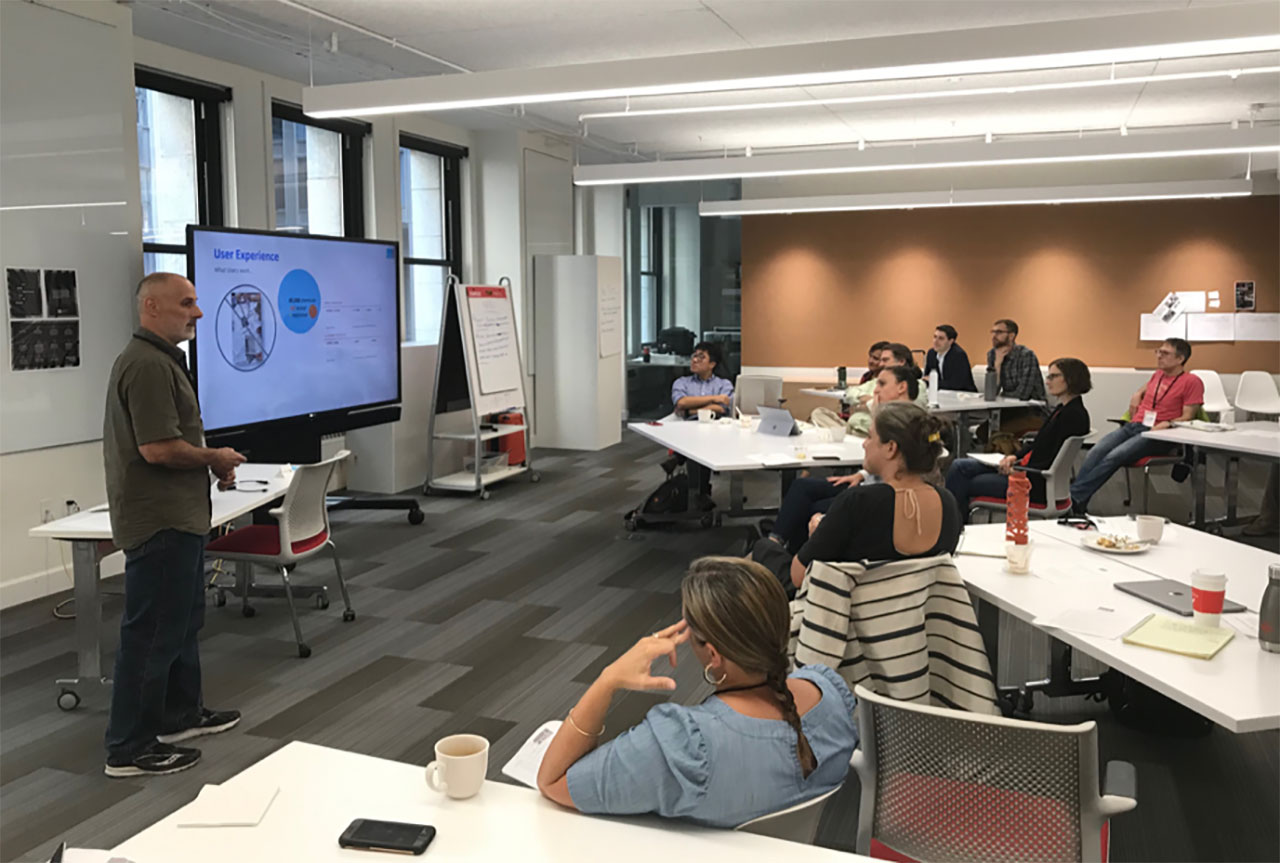 HPD Open Standard – Technical Committee Begins Efforts on the Next Major Release – Version 3 – and, a Look Back at the Progress We Have Made

The HPD Open Standard was first released as Version 1.0 in October of 2012. It was a working prototype specification that enabled the engagement of hundreds of manufacturers and members of the design community in learning how to gather and use chemical ingredient and associated health information about building products. So much has happened since this first release that it is sometimes easy to forget how relatively recent the advent of this information is in the building industry, and how pioneering these initial efforts were.
It is fair to say that Version 1.0 presented a steep learning curve for everyone involved. Many of these learnings have been incorporated into Version 2 of the Standard, which was released in September 2015. Over the past four years, Version 2 has matured into a highly functional specification. Many new reporting features are designed to support full harmonization with building industry rating and certification systems, advance key methods such as hazard screening, and extend reporting into the full supply chain – the Supplier HPD. Tools to create and use HPDs, and the automated transfer of HPD-reported data to many other information systems, have now been implemented. Annual “dot-releases” are continuing to make incremental improvements, with the final v2.3 dot-release planned for 2020 release.
The HPDC Technical Committee, led by Chair, Mike Manzi of Bora Architects, Vice-Chair, Lisa Britton of Industrial Louvers, and HPDC Technical and Education Director, Tristan Roberts, initiated work on the next major release – Version 3 – with a day-long summit, held in Chicago, September 17-18. The first face-to-face meeting of the full Technical Committee, the session set key goals for Version 3 – which is planned for 2021 release of v3.0 and is envisioned to continue with dot-releases through 2025. Taking harmonization to a next level, the Version 3 specification will initiate a modular, flexible format to enable inclusion of global and industry variations in reporting standards, and tailoring of reporting formats to the reality that use and viewing of HPD data will increasingly be via a burgeoning number of digital applications.
HPDC Members will be receiving a survey in December to gather ideas for the Version 3 planning process – please take this opportunity to share your ideas. If you are interested to more actively participate in the development of Version 3 – please consider joining HPDC’s Technical Committee or Technical Sub-Groups. Open Call for Technical Committee Applicants will be issued in December, and for Technical Sub-Groups in March. As a member of HPDC’s technical committees you can make a difference and help us accelerate the change that we all want to see – we invite your participation.

HPDC member, Parsons Healthy Materials Lab is presenting a new conference to explore the challenges of creating a healthier environment through change in our academic and design practices.

Who designs the future? Who shapes it? Who teaches it? How does an understanding of the fundamental issues threatening our planet and human species change the way we teach and launch the next generation of architects and interior designers for this new era? What are the problems we will face if we don’t consider the complex environmental implications of design decisions? What does the future look like if radical change happens now?

In this era of Climate Crisis, and from the vantage point of material health, there is an urgent need to imagine new paths for architecture and design in order to create a new healthier future for everyone.

This symposium provides a platform to examine issues of material health and celebrate material innovation, grapple with new and long-sustained challenges in socially engaged research and practice, as well as critically reflect on necessary changes to academic architectural and interior design programs. Together, exceptional perspectives will identify viable alternatives and illuminate new paths for the next generation of architecture and design.
LEARN MORE

HPDC continues to grow our membership now with over 250 member organizations. Membership is open to any organization that participates in the industry and supports the goals of transparency and material health practice of the HPDC. See a full list of HPDC Members and Sponsors.

Please Join Us in Welcoming Our Newest Members to HPDC

Learn more about HPDC membership. For the full list of HPDC members – now over 250 organizations – click here
HPD Collaborative is a not-for-profit member organization responsible for the maintenance and evolution of the HPD Open Standard. For more information, or to join HPD Collaborative, please visit the HPDC website. The work of HPD Collaborative is made possible by our members—through their volunteer efforts and annual dues—and by our sponsors, with their generous financial contribution. We would like also to thank the JPB Foundation for their support of our work through the HAMP project.

Members, log in to the Members Portal to get involved!

Not a Member? Click here to learn more about the benefits of membership!